TestDisk is a partition scanner and disk recovery tool that can recover lost partitions and recover disk and data. If you are using Ubuntu Linux, its a good idea to keep recovery tool installed in the system. In case you accidentally delete or alter a partition, it can be recovered by using TestDisk. If you have lost files, it can recover lost files. To get and install TestDisk in Ubuntu, follow this guide.

TestDisk is already in the Ubuntu repository. Its a part of Ubuntu apps.

Press Ctrl+Alt+T to bring up terminal window in Ubuntu. You can install Testdisk by using following command in the terminal.

To run Testdisk as root, use following command (depending on package name):

Hit Enter. This should opened Testdisk in Ubuntu. 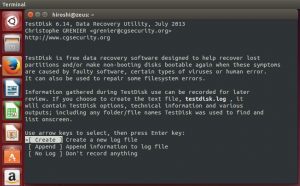 OR here is the command depending on package name.

By using terminal commands, you can install software in Ubuntu from ‘official Ubuntu repository’ that is a part of Ubuntu apps. While installing you might encounter the following error: ‘Unable to locate package‘. This means software was not installed. You have to do the following to get rid of this error.

If you just installed Ubuntu, then you need to run upgrade and update commands in terminal.

Check spelling of the command statement. Syntax is the following:

It command is correct, enable universe repository from Ubuntu software settings. Here is the error when I tried to install testdisk.

Open ‘Software and Updates’ by typing ‘software’ in search. 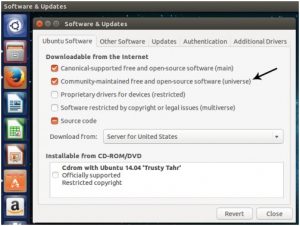 Next time when you install apps from official Ubuntu repository, by using correct command and name of package, it will be installed in your computer.

Was this article helpful?

Ramesh A has not written a bio yet